When Rickards talked about the ‘Gold Space’ global picture (15:45min) he pointed out: “Currency wars are about competing devaluations… Governments may try to trash their paper currencies”, but the gold superpowers

are the US with 8,000 tons of gold  and the EU holding 10,000 tones — that is where the push and shove is. However there is one big problem with all of this, the gold is not in Europe — this gold is in New York, in the basement of the federal reserve in New York. “And good luck to the Europeans trying to get it back. The trouble with all that gold pledging, is that the gold is actually in New York and the US is in a position to confiscate it when the time comes.”

This would not be the first time; in 1933 President Roosevelt issued an Executive Order – calling in gold. President Gerald Ford repealed the Executive Order December 31, 1974, with Executive Order 11825. This was necessary because on the same day Congress restored Americans’ right to own gold. In 1977 Congress removed the president’s authority to regulate gold transactions during a period of national emergency other than war. As is apparent governments could change the laws governing gold at any point, and often simply ignores the laws. 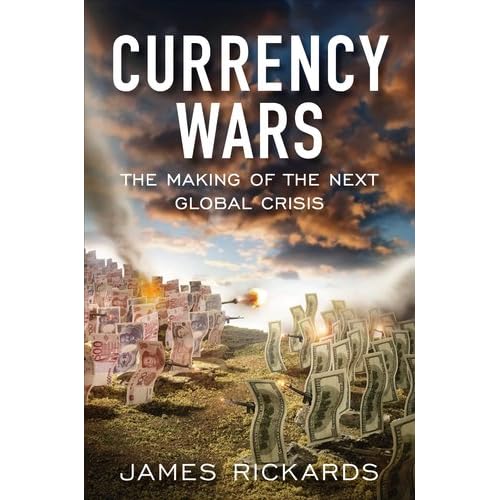 Talking of changing the law and currency wars, the US continue to protects it’s interests with a bill that aims to punish China for devaluing its currency. The FT reported last month: US currency bill passes Senate vote “despite a warning from China that the legislation could plunge the global economy into a 1930s-like depression.”

The bill aims to pressure countries which the US labels as deliberately misaligning their currencies. It will require estimates of under-valuation to be included in “countervailing duty” tariffs Washington imposes on imports it deems to be state-subsidised.

Although the legislation passed with a comfortable 63-35 majority, republican leaders of the House of Representatives have refused to schedule a vote on it.

Max Baucus, chairman of the Senate finance committee, is quoted in the FT saying: “China must stop flouting the rules, and ending its currency manipulation is one important step in that process.”

China’s official Xinhua news agency commented a few hours before the vote; “Comparing the current political and social situation with that of 80 years ago, we can find stark similarities: an economic downturn, a high unemployment rate, marked popular discontent, and growing political conflicts, especially when presidential politics is getting hot.”

“Lawmakers focus mostly on the economic interests of their own electoral districts but fail to consider major political and economic issues from an international perspective.”

The world trade centre and the missing horde of Gold bars

So… was the 9/11 event considered the ‘right time’ to confiscate other countries gold? Was it, among other things, orchestrated to veil this gold hoist?

On Nov 01, 2001, the Times online reported about the discovery of hundreds of gold ingots, part of a 1 billion dollar cache which was lost when the twin towers fell.

“The Comex metals trading division of the New York Mercantile Exchange kept 3,800 gold bars — weighing 12 tonnes and worth more than $100 million (£70 million) — in vaults in the building’s basement. Comex also held almost 800,000 ounces of gold there on behalf of others with a value of about $220 million. It also held more than 102 million ounces of silver, worth $430 million.

The Bank of Nova Scotia, which kept gold in the Comex vault, reported $200 million of gold lost in the wreckage. Comex also held precious metals for Chase Manhattan Bank, the Bank of New York and Hong Kong and Shanghai Banking.” This image is found on the PBS.org
website companion for the TV documentary America Rebuilds. The page, titled ‘A Treasure in Silver and Gold’, describes the vault; two levels of 3,000 square feet each. Image credited to Leslie E. Robertson and Associates.

Dylan Avery rightly asks in his film Loose Change: “So let me get this straight, gold from world centre building 4, was found under world trade centre building 5, in an empty delivery truck with an empty escort cars. I think it is safe to say, they were running away from the south tower, the question is how did they know to flee from their stash, when even the fire fighters did not expect it to collapse?”

Mayor Rudolph Giuliani announced on 1st of Nov 2001 that “more than $230 million“ worth of gold and silver bars that had been stored in a bomb-proof vault had been recovered. But there seem to be no record available as to where the rest of it might be.

Jeff Zack from the International Association of Firefighters IAFF discussing Giuliani’s conduct after 9/11 told info wars: “The real reason was that the Bank of Nova Scotia’s assets were buried in that rubble, the day they got those assets out of that pile, Rudy shut the pile down, said ‘everybody off, we’re going to full scoop and dump’… It was gold, it was silver, it was other assets, I’ve seen a lot of numbers too, I don’t have an exact one so I don’t wanna give it to you… Our firefighters were on the pile helping excavate the gold as well, our problem is that all Rudy cared about at the end of the day was the gold bricks, not the lives and the memories of those that were the true heroes that day.”

Going back to where we started — James G. Rickards and James Turk, Director of the GoldMoney Foundation, talk about the European sovereign debt crisis and the European Central Bank buying Italian bonds in the video below. They talk about the ECB’s role in the crisis and how it is becoming increasingly politicised, in contrast with its predecessor of sorts — the Bundesbank. They talk about the possible differences between Jean-Claude Trichet and his successor Mario Draghi. James Rickards explains how Europe is developing a common fiscal policy with a common Treasury, in the form of the European Financial Stability Facility (EFSF), which will dictate fiscal policy to many member countries — such as Greece — in exchange for rescue funds. Rickards is bullish on the euro, among other reasons because the eurosystem owns 10,000 tonnes of gold.

Rickards and Turk debate whether or not central banks really own the gold they claim to own, and talk about how the current currency war — with countries competing to see who can devalue their currencies the most — is a disastrous zero-sum game. They discuss the problems facing countries whose currencies are appreciating rapidly, such as Brazil and Switzerland, and what these countries might do to curb this appreciation.

They comment on the recent debt-ceiling debate and how the compromise reached, despite all the headlines, does not actually include any real cuts, including only cuts in proposed increases. Rickards mentions his four possible scenarios for the future of the international monetary system: SDR, gold, multiple reserve currencies or chaos.

They talk about the potential for hyperinflation as the US government continues to rely on debt, instead of revenue, to finance an increasing portion of its outlays. Jim Rickards sees the potential for both deflation and hyperinflation and explains that it will depend largely on the actions of the Fed, with Bernanke leaning more in the direction of more money printing.

They discuss South Korea’s recent acquisition of 25 tonnes of gold, as well as Indian and Chinese buying. Rickards explains that China is trying to bypass the world market by buying directly from miners.

James G. Rickards forthcoming book is: “Currency Wars. The making of the next global crisis.”

This interview was recorded on August 4 2011 in London.

Fukushima – The Media – The Uranium Queen

Fall of the Republic

The Empire of ‘The City’

This website uses cookies to improve your experience while you navigate through the website. Out of these, the cookies that are categorized as necessary are stored on your browser as they are essential for the working of basic functionalities of the website. We also use third-party cookies that help us analyze and understand how you use this website. These cookies will be stored in your browser only with your consent. You also have the option to opt-out of these cookies. But opting out of some of these cookies may affect your browsing experience.
Necessary Always Enabled
Necessary cookies are absolutely essential for the website to function properly. This category only includes cookies that ensures basic functionalities and security features of the website. These cookies do not store any personal information.
Non-necessary
Any cookies that may not be particularly necessary for the website to function and is used specifically to collect user personal data via analytics, ads, other embedded contents are termed as non-necessary cookies. It is mandatory to procure user consent prior to running these cookies on your website.
SAVE & ACCEPT